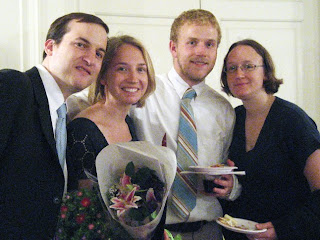 Family and friends filled the Ackerman library on July 24th when the Institute hosted its 2008 graduation ceremony. Seventeen externs took part in the celebration commemorating each trainee’s completion of the Ackerman Institute Core Curriculum. Trainees who complete the full Core Curriculum enroll in the Foundations in Family Therapy course and then participate in Live Clinical Supervision and the Clinical Externship in Family Therapy. Upon completion of the Clinical Externship, each trainee receives a certificate at graduation and an invitation to join the Ackerman Alumnae/i Association.

Lois Braverman, President of the Ackerman Institute, welcomed the graduates and their guests.

“Completing the Ackerman training program is not an easy task,” Ms. Braverman said. “It requires hard work, dedication and a major commitment of time over a period of years. I am so proud of all of you and I know your families and friends share that pride.”

Marcia Sheinberg, Director of Training, characterized the graduates as “an impressive group.”

“You have opened your hearts and your minds to expand your ability to help people,” she said. “You have done so based on a belief in the principles and practices of a relational perspective. While most of the mental health community continues to conceptualize problems as located in individuals whose context may or may not facilitate their well-being, you believe that the essence of one’s health is in the context of connection.”

“As a profession we are facing challenging times,” Ms. Sheinberg continued. “Never has the fork in the road been clearer and the consequences for our field, not to mention the world been greater. As you continue in your careers you will be both ambassadors of the Ackerman approach to human suffering and an advocate for the principles we ascribe, which values all perspective even those which we choose to challenge.”

Each of the three supervisors also congratulated the students. Evan Imber-Black said her externs had shown her they possessed the “authenticity, warmth and empathy” needed to be successful therapists.” She called on the externs to fulfill an ancient Hebrew imperative to “repair the world.”

Miguel Hernandez told his students that their dedication and hard work filled him with the same kind of pride parents feel in their children’s accomplishments.

“You are no longer my students,” he said as he presented each of his externs with flowers. “You are now my colleagues.”

Fiona True said she often uses the metaphor of a pond in family therapy, but that her extern group had really sailed on an ocean. There were storms, she noted, but the externs made their ship seaworthy and took it to an “incredible place.” She congratulated her students for their shared commitment to learn and grow, their dedication to the families they treated and their great intellectual curiosity.

Many of the students then spoke briefly, thanking the faculty and staff at Ackerman, as well as their own families and friends for their love and support.