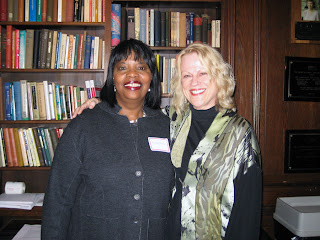 “Somatic Experiencing (SE) is an “amazingly powerful and effective” therapeutic approach, according to Nancy J. Napier, LMFT, the guest speaker at the second Alumnae/i Lecture in the 2007-2008 series. In her talk, entitled “An Introduction to Somatic Experiencing: Including the Body in Psychotherapy,” Ms. Napier, pictured above (right) with Brenda Shrobe, President of the Alumnae/i Association, commented that SE can be applied to anyone at any time who has to deal with “too much too soon.”
Ms. Napier said that SE was developed by therapist Peter Levine who, in the course of studying animal behavior, questioned why animals return to their natural rhythm after traumatic experinces while human beings often do not. The answer, Ms. Napier explained, is that human beings do not allow their bodies to move through trauma.
SE, Ms. Napier said, is a very compassionate model that recognizes that “our bodies are wired to heal.” In fact, she noted, “our bodies have a blueprint for health.”
In SE, Ms. Napier said, therapists work with people to “slow things down to the pace of the body. The resource for SE always is time.”
Ms. Napier said it also was important to remember that “trauma is in the nervous sytem, not the event.” That concept explains why one person is traumatized and another not traumatized by the same event.
When people are traumatized, Ms. Napier said, they are in overload with “mobilized energy with no place to go.” They are stuck in the “fight/flight” mode. The other extreme of traumatized behavior is shutdown. Both extremes bring with them an array of symptoms. Ms. Napier said these extremes exist at the top and bottom of a curve, and the goal of SE is to keep people somewhere within the curve, “within their range of resilience.”
As part of the presentation, Ms. Napier showed two videos of people being treated with SE. the first video focused on a baby who had experienced a traumatic birth and, as a result, never cried. The second video showed how SE helped a middle-aged man who had spent his childhood in a Japanese prisoner of war camp. In both cases, SE achieved a positive result.
The key is to “let the process unfold in an informed way,” Ms. Napier said. “The healing is always in the body.”
Nancy J. Napier is in private practice in New York City. She is the author of Recreating Your Self; Getting Through the Day; Sacred Practices for Conscious Living; and, co-author of Meditations & Rituals for Conscious Living. Ms. Napier also is a former Board member of the New York Association for Marriage and Family Therapy, past Board and Faculty member of the New York Milton H. Erickson Society for Psychotherapy and Hypnosis, and past president of the New York Society for the Study of Disocciation.