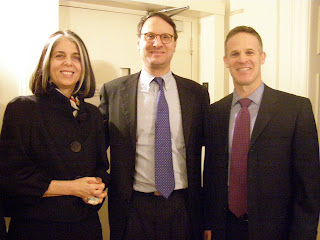 Speaking to a full house in the Ackerman Institute Library, Dr. Adi Loebl, the Institute’s new Medical Director and recipient of this year’s Carl Kempner Award, focused on the care of the elderly as he delivered the annual Carl Kempner Memorial Lecture on December 2nd.

The Kempner Award and Lecture are presented under the auspices of the Center for Families and Health. Dr. Evan Imber-Black, Director of the Center, introduced Dr. Loebl.

In his presentation entitled “An Integrated Psychiatric and Family Systems Approach to Caring for Our Elders,” Dr. Loebl noted the many ways in which medical and psychiatric problems, along with complex family dynamics, are intertwined in the care of older patients. The specific case Dr. Loebl used in his talk was that of a 75-year-old woman, Mrs. Smith, with several serious medical conditions, including hypertension and diabetes, pain and osteoporosis, urinary incontinence and memory loss.

Dr. Loebl said that hypertension and diabetes, both common conditions in the elderly, can have an impact on the delivery of blood throughout the body, including the brain. If a patient is not taking appropriate medication for one or both of these medical conditions, the damage to the blood vessels and consequent lack of adequate blood flow to the brain may cause behavior that appears symptomatic of dementia or even vascular dementia itself. This is best prevented with proper medication.

Just as not taking medication for a physical condition can affect symptoms of mental illness, taking medications also can affect mental health, Dr. Loebl commented. He explained that memory problems can be a side effect of many medications prescribed and commonly in medications used to treat urinary incontinence. Coordination of care is vitally important, especially in the elderly who often present with multiple problems for which they are given many different types of medication by a variety of doctors.

Dr. Loebl’s case study demonstrated clearly the importance of family members in caring for an older person as well as the powerful impact of family interaction. Mrs. Smith is a divorcee with four children, but only one daughter, Jenny, is actively involved in her care. Mrs. Smith also has a home health care worker, Cindy. Although Jenny and Cindy were working to coordinate Mrs. Smith’s care, several critical issues had emerged. Jenny was beginning to feel jealous of her mother’s attachment to Cindy. She also resented the fact that when her less involved brother and sisters came to visit, her mother seemed to appreciate them much more than she appreciated Jenny These family concerns surfaced at a time when Jenny was feeling increased pressure about her work and it became apparent that Jenny was beginning to spiral into depression, herself.

Dr. Loebl used circular questioning to address some of these issues. First, he asked Jenny to think why her mother thought the other children were not as involved as Jenny. Then he asked Mrs. Smith to speak about why she thought Jenny was feeling depressed and overburdened. This type of questioning calls up substantial amounts of relational information that may not be made available otherwise, Dr. Loebl said. It also opens the door to exploring intergenerational transmission of beliefs. In the case of the Smith family, Dr. Loebl explained, Jenny may have been repeating a pattern set by her mother, who lost her own mother as a young woman and stepped in to care for her father and siblings.

Dr.Loebl also said he worked with Cindy and Jenny to ease any tensions between them. Dr. Loebl’s approach was unusual in that he involved the caretaker as fully as the family members. As a result, the caretaker, Cindy, played an instrumental role in helping to mobilize the non-involved family members, which Jenny felt unable to do. This helped ease Jenny’s jealousy and sense of burden. Dr. Loebl’s attention to the home health aide’s position as an important member of the system is an innovation in family therapy with geriatric patients and their families.

Dr. Loebl said that recognizing the complex interactions between an illness and a family helps to clarify treatment planning because goal-setting then can be guided by an awareness of the components of family functioning, the phases of the illness and the family’s beliefs in ways that optimize care. Psychosocial factors, as well as biomedical interventions, become important influences in the healing process. Dr. Loebl said that by integrating psychiatric and family systems approaches we can better help families understand the nature of the illness and understand more fully the role of the family at different stages of illness.

The Carl Kempner Award is named in honor of the late Carl Loeb Kempner, husband of Doris Kempner, an active member of the Ackerman Board for many years. The Kempner family’s commitment to education and social services has been life long and, with the support of the Armand G. Erpf Fund, the Carl Kempner Award continues to enhance knowledge in the development of clinical intervention and in training therapists working with families coping with major health issues. Each year the Center for Families and Health at Ackerman selects an awardee from among our Ackerman trainees, alumni or young faculty members engaged in the most innovative research in the area of families and health. The award recipient delivers the Carl Kempner Memorial Lecture.