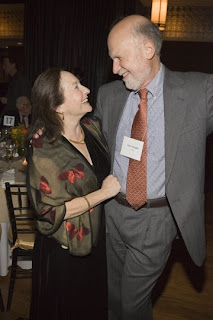 Abbe and Peter Steinglass
Dr. Peter Steinglass, Director of Ackerman’s Center for Substance Abuse and the Family and President Emeritus, was honored by the Freedom Institute at its annual Mona Mansell Award Dinner at the Hotel Pierre on May 11th. The Mansell Award, named for Freedom’s founder, is given annually to an honoree deemed to have significantly advanced the field of substance abuse treatment.

In her remarks introducing Dr. Steinglass, Connie Murray, the Executive Director Emeritus of the Institute, said the Institute selected Dr. Steinglass as this year’s award recipient because of his decades of research and clinical contributions toward an understanding of the importance of family factors in substance abuse treatment.

Dr. Steinglass served as the Ackerman Institute’s third Executive Director and later as its President and CEO. He became President Emeritus in August 2005. During his career, Dr. Steinglass has won numerous awards for his work in academic psychiatry and for his clinical and research collaborations with medical and mental health institutions, including the Distinguished Contribution to Family Therapy Research Award from the American Family Therapy Academy. Dr. Steinglass also was a Distinguished Life Fellow of the American Psychiatric Association.

The Freedom Institute was founded in 1976 as a not-for-profit resource center for individuals and families affected by alcohol and drug dependency. The Institute offers a comprehensive program of family consultations, interventions, assessments, individual and group counseling and referral to Inpatient treatment centers. One of Ackerman’s alumnae, Mary McAllister, has developed a thriving family program at Freedom, with Ackerman faculty providing advanced supervision to her clinical team.

“We are so pleased that the Freedom Institute has recognized Peter for his very large and significant body of work,” Lois Braverman, President of the Ackerman Institute, said. “This honor is very well deserved and I know that everyone at Ackerman joins me in offering congratulations to Peter.”