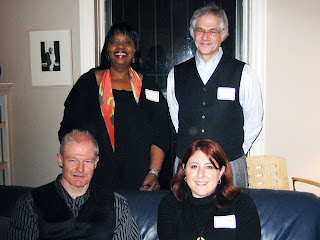 Dr. Tunnell began his talk by contrasting the differences between Salvador Minuchin’s structural model for couple therapy and AEDP. Dr. Tunnell explained that in the AEDP model, the therapist’s goal is to get the couple in treatment to stop behaving defensively so they can experience core emotions, such as sadness or joy. When people are unable to express their feelings, Dr. Tunnell continued, symptoms appear, but when people stop being defensive and express their emotions, they then enter a core state. In order to get patients to let go of their defenses and anxiety, Dr. Tunnell said, the therapist must have an affirmative relationship with the couple so they feel safe enough to talk about how they really feel.

Dr. Tunnell said that after he studied the structural model with Salvador Minuchin, he came to believe that “that kind of confrontation is shaming to couples.” The structural model raises anxiety, he continued but “AEDP does just the opposite. It lowers anxiety.”

Dr. Tunnell used the fable of the wind and the sun to illustrate his point. In that fable, the question is how do you get a man walking down a road to take off his coat. The structural model (the wind) says you try and blow the coat off; the AEDP model (the sun) says you warm the man until he removes the coat himself. By lowering anxiety levels, AEDP helps people connect with their feelings and, in turn, one another.

Dr. Tunnell noted that AEDP, which he studied with Diana Fosha, is grounded in attachment theory. From the first session, the therapist is affirmative, creating a healthy attachment and a safe bond with the couple. In order to achieve this objective, the therapist must pay attention to non-verbal signs and allow emotion to emerge in the room. The therapist can encourage the couple to be more empathetic by asking each partner if he/she noticed the other person’s non-verbal reactions. The goal here is for one person to facilitate and encourage, rather than repress and discourage, the full expression of emotion by the partner, a process AEDP calls “dyadic regulation of affect.”

Dr. Tunnell showed several videotapes of sessions to illustrate his points. The last video he showed was not actually an AEDP model, but incorporated many AEDP concepts. The video focused on a couple coping with the approaching death of one partner. In the course of the couple’s therapy, the dying partner made a number of connections between the current situation and his partner’s past, and this association seemed to release a significant amount of anxiety.

The audience was clearly deeply moved by the tape and the process they witnessed. Several audience members expressed admiration for the dying partner’s ability to put aside his own needs and focus so strongly on his partner’s emotional state. One woman commented that the dialogue between the two men was “like watching a play.”

Another alumnus connected the tape and lecture to his overall feelings about the Ackerman Institute.