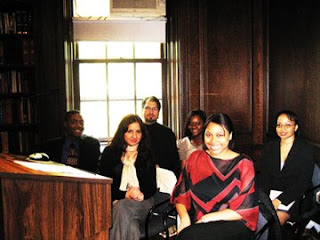 Six new graduates of the Social Work and Diversity Program presented cases and spoke about the ways the program changed their lives at a moving ceremony in the Ackerman Library on May 6, 2009.

The Ackerman Institute initiated the Social Work and Diversity Program in 1992 as a result of the vision and generosity of Arthur Maslow, former Chair of the Ackerman Board of Directors and current Trustee Emeritus. The Program was the country’s first initiative designed specifically to address the critical need for a significantly increased number of professionals of color in family therapy services in community-based social service agencies. The Program offers social work students of color the opportunity to intern at Ackerman and enroll in a postgraduate training program with scholarship support. Mr. Maslow and his wife, Carol, attended this year’s presentation.

Laurie Kaplan and Sippio Small, Co-Directors of the Program, spoke briefly to the students and guests before the presentation. Ms. Kaplan noted that many of the students in the Program had never worked with families before or with a co-therapist.

“The group experience is a very big part of this Program,” she explained.

Mr. Small recommended two books to the students, Families of the Slum by Salvatore Minuchin and Manchild in the Promised Land by Claude Brown. Mr. Small observed that “just getting families to come in is a big start” when working in marginalized communities.

The first student who spoke, Brandyn McKinley from Columbia University, said the Program took her “on an unexpected journey.” She said that a large part of her educational experience was her development of a “language of clinical practice” that helped her learn how to ask questions and trust her own judgment. Ms. McKinley said that the case she was presenting resonated strongly with her because one of the objectives she set was to help the wife in the family express her feelings more often. As she worked with the family, Ms. McKinley said she herself began to move past her fear of not being perfect and became more vocal in the sessions.

Cahlel Gumbs from New York University said she had grown both professionally and personally as a result of her enrollment in the Program. She said that when she created a genogram of her own family, it made her question why she knew nothing of her father’s history. The value of the genogram, she said, is that “it highlights patterns in family history and secrets in families.” Ms. Gumbs used the knowledge she gained about her personal life as she worked with a family with an absentee father.

Leighton Whyte, from Hunter College, said that his childhood was characterized by a love of fantasy and a resentment of authority.

“I didn’t like being told what to do,” he explained. “I thought people who told me what to do were trying to steal my voice.”

Mr. Whyte found his clearer understanding of how those issues affected his own life informed his work with the family he treated. Because he didn’t like being told what to do, Mr. Whyte found himself reluctant to intervene with the couple he was treating and relying too heavily on his co-therapist to “save me.” During the course of the Program, Mr. Whyte said he “learned how to assert myself more and also how to take advice from others.”

The fourth student, Silvia Espinal, from New York University, had a special interest in working with immigrant families. Her presentation focused on a family with an absentee father and immigration issues. Ms. Espinal said she identified strongly with the children in the family because she also was an immigrant and had been separated for a period of time from her own mother. Ms. Espinal said that when she first came to the U.S., she had difficulty learning English, but expressed herself through photography. She shared her love of the visual arts with the family she treated and, especially, with one of the children who also was interested in art.

Dolores McCullough from Columbia University came to the Diversity and Social Work Program after a career of more than 20 years in human services. She described herself as very task oriented and said her turning point in the Program came when Sippio Small asked her not to prepare a plan for her next session with her family.

“This truly unnerved me,” Ms. McCullough said, “but it helped me learn to focus more on the process. Not planning gave me an opportunity to reflect and I saw that therapy can be a guide rather than a solution.”

The final student to present, Jose Frias from Hunter College, said he had always worked alone and the group experience was totally new to him. The family Mr. Frias worked with was having difficulties with commitment and also dealing with issues of loss. Mr. Frias, who was dealing with the loss of a close friend, himself, said the team helped him develop new approaches to deal with such difficult concerns and to recognize how to use personal issues appropriately.