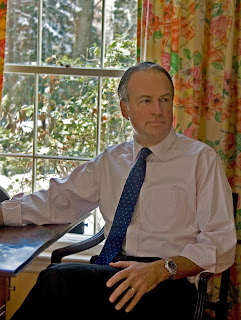 Alec’s office reflects his personal values. There are university photos, photos of his family, his three daughters, his son, his wife of 34 years, and, of course, the New York Yankees. His children went to Princeton, Yale, and Georgetown.

Alec Haverstick is the newest member of the Ackerman Institute’s board. He has spent more than thirty years listening to and creating solutions for private clients. As Chief Executive Officer of Boxwood, he oversees all client relationships.

Alec grew up largely in Manhattan, on the Upper East Side, and lived in a family community with his maternal grandparents at the center. Alec’s grandfather’s story is one of success. He moved in 1915 to New York at a time when it was unusual for someone from the South to be involved in the New York financial world. Over time he became one of the most successful business men of his generation. He became the chairman of the Guaranty Trust Company, which he helped merge with JP Morgan, was a key figure behind the forming of Coca-Cola, and succeeded Averill Harriman as Chairman of the Illinois Central Railroad. “My parents were divorced so I was raised by my grandmother. I went off to boarding school, then to Yale, Columbia Law School, and after 8 years of law practice in New York City I moved into finance.”

Alec began his career as a Trusts & Estates attorney in New York City, and went on to join the financial service side of Wall Street, where he focused on creating financial solutions for wealthy individuals. He was, successively, a Managing Director at Kidder Peabody, Prudential Securities, Lehman Brothers and Deutsche Bank. In this latter role he created the client services area for families with wealth in excess of one hundred million dollars and led the development of risk mitigation, liability management and liquidity provision techniques for individuals with concentrated and/or inherited wealth.

Alec formed Boxwood Wealth Management in June 2007 as a family advisory firm providing a wide array of expertise to individuals, families and their companies. In May 2008, he refocused the firm as Boxwood Strategic Advisors, LLC.

Alec first encountered the Ackerman Institute through a meeting with Peter Steinglass at Deutsche Bank in a program they ran together on wealth and responsibility. His interest in the work of the Institute was further fueled when he met the current President and CEO, Lois Braverman. Family values run through all aspects of Alec’s life. “I’ve always focused on being an essential part of a family. I created a business that is based on family principles and works with families… I strongly believe that connectivity is the key to an integrated lifestyle.”

Alec is excited to join Ackerman’s board and help shape its future. “I am more of a change agent than a quiet participant. And I hope that’s okay. I don’t just think outside the box; I tend to operate outside the box as well.” His main interest lies in helping the Institute distribute its intellectual capital to the world. He feels that the Ackerman Institute’s role in helping families is key to solving the larger economic and social crisis in America. The Institute is “one of the birth places of family therapy… American society is going like this (Alec widens his arms) and the Ackerman Institute can bring it together, in a high impact sort of way in New York City, which is the economic center of the world.”
The Ackerman Institute is happy to have Alec Haverstick on its board and looks forward to his help in shaping a vision for the Institute’s future.