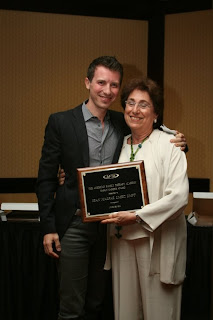 Jean Malpas was the recipient of the first American Family Therapy Academy (AFTA) Early Career Achievement Award which recognizes achievement in theory, research, or practice in the first 10 years after earning one’s degree. The award is based on the promise of contribution to the field. Ellen Berman, former Secretary and Board Member of AFTA and current Secretary of the Board of Directors of Family Process, introduced Jean as “the perfect example of this… Jean’s s enormous appetite for work, widely ranging quest for knowledge and commitment to community, in addition to his warmth, kindness, elegance, have made him a visible and important member of the field and of AFTA and a wonderful recipient of this award.”

Jean trained at Brussels University and NYU, and went to the Ackerman Institute for his postgraduate training from 2000-2005 while he was working as a counselor at the LGBT center in New York. Following his graduation from Ackerman’s post graduate training program he joined the faculty where he taught in the clinical externship program. With the support of Ackerman’s senior faculty members, Jean joined AFTA in 2006 and became the first chair of the Early Career Member Committee. In 2010 he was elected to the AFTA Board of Directors.

Jean presented internationally on issues around gender fluidity in Canada, Israel, Brazil, Argentina, Chile, and Belgium. His publications include Between Pink & Blue: A Multi-Dimensional Approach to Gender Nonconforming Children and their Family to be published in Family Process, and Can Couples Change Gender: Couple Therapy with Transgender People and their Partners which will be published in the Handbook of Affirmative LGBT Couple and Family Therapy.

He has also recently focused on international training and humanitarian work, attending trainings in Uganda, Haiti, and India. Jean is currently working with Ackerman faculty Peggy Papp and Michele Scheinkman on a project on Couples and Impasses. His interests include Addictions Counseling, Couples Therapy, and Gender. Recently he has developed cutting edge work on helping couples deal with gender transitions in their partners and/or children.

As Jean so aptly remarked, “It takes a village to raise a decent family therapist.” Jean thanked the Ackerman Institute and AFTA for encouraging him to take risks.