Ackerman Institute’s Gender and Family Project hosts a “Night of A Thousand Genders”!

On Monday, December 2, 2013, the Ackerman Institute’s Gender and Family Project hosted an incredible call for action and support of gender variant and gender non-conforming youth in its first ever “Night of A Thousand Genders” celebration at Joe’s Pub at the Public Theater!

The Ackerman Institute’s Gender and Family Project took part in a very special evening to honor and celebrate the beauty and resilience of gender variant and gender non-conforming kids and their families. “Acceptance is protection” became the tagline of the evening with over 200+ guests roaring in applause at Jean Malpas’s inspiring speech.  The night was an astounding success with an electric energy felt by one and all.

Jean Malpas, the Director of the Gender and Family Project, did not mince words when he spoke about the struggle that LGBT kids face in their lives. “Half of LGBT kids still experience negative reactions when they come out at home. 25-40% of homeless youth in NYC are LGBT identified and a quarter of these homeless youth are on the street because they have been kicked out of their homes. We know that family acceptance is a key protective factor. It dramatically decreases chances of mental health issues, school drop-out, substance abuse and suicide. It’s just the best prevention we know of.”

Jean and his production team (which included Manhattan Theater Club producer, Lisa McNulty, Tralen Doler, Ackerman Institute’s Adriana Londono, Topos Graphic’s Roy Rub, video producer Reda Cheraffadine, and committee chair Jane Rennert-Miller) worked tirelessly for the past year to create not only an evening to remember but to give every family with gender non-conforming children a chance to accessible care, love, and opportunities.

Sponsored by Logo TV and Delta Airlines, the event garnered the support of a host of celebrities and became a veritable who’s who of the LGBT community. Grammy Award winning composer Stephen Schwartz (of Godspell, Pippin, and Wicked) acted as Honorary Chair for the Night while acclaimed composer-lyricist Lance Horne served as Musical Director.

The legendary Olympia Dukakis emceed the evening and talked about her various LGBT roles. “I have played LGBT characters, and have come to understand the power and importance of giving unheard voices and underserved communities the public support they need.”
The evening’s performers were all LGBT identified and allies committed to the cause.  The powerhouse cast of performers included transgender legends like Our Lady J and Justin Vivian Bond. Telly Leung, of Glee, and Nicholas Ashe gave powerhouse performances. The talented actor Alan Cumming was in attendance and guests were thrilled when the comedienne Joan Rivers made a surprise appearance.
Several members of the press and major media outlets took an outstanding interest in “Night of a Thousand Genders”:  Good Morning America, Huffington Post, Playbill, Edge on the Net, Broadway World, Logo TV, New Now Next, Page Six, NY Times, Metro, Getty Images, and NY Social Status all highlighted the night.
Attendees left donning Gender and Family Project buttons wanting to know when they could buy tickets to next year’s event energized to continue the tradition. 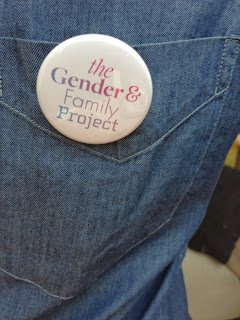