Dr. Nancy Boyd-Franklin, Professor in the Graduate School of Applied and Professional Psychology at Rutgers University, delivered the first Alumnae/i Lecture of the 2007/2008 season on October 12, 2007. Her topic was “Special Issues in the Treatment of African-American Families.”

Using a combination of lecture, clinical case examples and videotapes, Dr. Boyd-Franklin shared insights with the audience about how to work effectively with African-American clients and families. Dr. Boyd-Franklin pointed out that there is great diversity within the African-American community, and offered advice to the participants about how to make use of cultural strengths, including the extended family network, religion and spirituality, and survival skills, in their work. The workshop also addressed the issue of racism, particularly in terms of its impact on family life, child rearing and gender issues. In addition, Dr. Boyd-Franklin spoke about the “invisibility” of African-American men and the fears of many black families for their male children.

Nancy Boyd-Franklin is an internationally recognized lecturer and the author of five books and numerous articles on ethnicity and family therapy, the treatment of African-American families, extended family issues, spirituality and religion, home-based family therapy, group therapy for black women, HIV and AIDS, parent and family support groups, community empowerment and the multisystems model. Currently she is the co-director, with Dr. Brenna Bry, of the Rutgers/Somerset Counseling Program, a school and community-based program that trains doctoral students to provide individual therapy, home-based family therapy, and school-based violence prevention groups for at-risk adolescents.

The Tribute to Families Gala, held on Wednesday, October 24 at the Lighthouse at Chelsea Piers, raised more than $700,000 in support for the Ackerman Institute for the Family. More than 300 guests attended the event, which honored Arthur Maslow and Alan Quasha. Jane and William Donaldson served as Honorary Chairs; Nina and Pieter Taselaar and Gregory and Dana Rogers were the Co-Chairs and Cheryl and Philip Milstein were the Vice Chairs.

“The Ackerman Institute is very privileged to have so many generous and caring friends,” Lois Braverman, President and CEO, told the guests at the Gala. “The work we do at Ackerman is vitally important and we absolutely could not do it without you.”

The evening began with cocktails at 6 p.m., followed by dinner and the awards ceremony. One early highlight was the first screening of a new video about the Ackerman Institute, It All Starts Here, created for the occasion. It All Starts Here is the new slogan of the Ackerman Institute. The video includes comments about Ackerman’s programs and services by members of the Board of Directors, faculty and students.

Speaking about Mr. Maslow, Ms. Donaldson recalled his role in initiating the Family School Collaboration with Howard Weiss and his vision and generosity in the creation of the Social Work and Diversity Program.

“Arthur didn’t do these things because they were fashionable or for his own aggrandizement,” she said. “He did them because he is a true humanist with a deep and abiding belief in the power of people and the value of families.”

In tribute to Mr. Maslow’s more than 30 year association with the Ackerman Institute, Ms. Donaldson said she was “thrilled to announce that your contributions and achievements will be honored for years to come because in the future, the Distinguished Service Award will be known as the Arthur Maslow Service Award.”

Ms. Donaldson also praised Mr. Quasha for his involvement with the Ackerman Institute.

“Alan has given of himself very generously,” she commented, “and he brings an important and interesting perspective to the work of the Ackerman Institute.”

Ms. Donaldson noted that Mr. Quasha’s perspective on the importanceof balancing work and family, the topic of the Gala’s panel discussion, came from his own experience as a very successful business leader, a participant on many non-profit Boards, and a husband and father of four children.

After dinner, Mr. Quasha joined William Donaldson, Honorary Chair of the Gala and former Chairman of the Securities and Exchange Commission, and Marjorie Magner, founding member and managing partner of Brysam Global Partners, for the panel discussion on The Demands of Work & Family: A Balancing Act. The discussion, which was projected onto two large screens, was moderated by television host Charlie Rose.

The conversation was lively as Mr. Rose, who confessed that ”I know nothing” since he is not married and has no children, asked the participants to define such terms as “quality time” and explain how they maintained balance in their own lives. Ms. Magner’s comments seemed to resonate most strongly with the women in the audience when she explained that as the working mother of a young child, she had always felt guilty whether at home or at work.

In addition to Board members, faculty, and friends, a group of ten Israeli therapists, who are visiting Ackerman for two weeks of seminars and workshops, also attended the Gala. The Israeli group, from the Shinui Institute, represent the Ackerman Institute’s newest international partnership. The group’s visit and attendance at the Gala were made possible by the generous support of Board member Alice Netter. 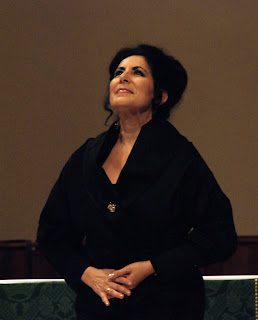