Tribute to Families Raises More than $495,000 in Support of the Ackerman Institute 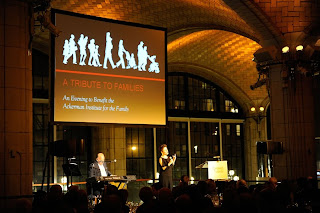 Thanks to the generosity of its friends and supporters, the Ackerman Institute for the Family’s third annual Tribute to Families Gala raised more than $495,000 in support of the Institute’s programs and services. More than 230 guests attended the October 20th event, held at Guastavino’s. The Gala was co-chaired by Ackerman Board members Diana Benzaquen and Alan Quasha. Ackerman Board Chair Greg Rogers and his wife, Dana, were the Honorary Chairs. Law and Order star Sam Waterston was the evening’s emcee and Broadway and cabaret actress and singer Christine Andreas performed.

After welcoming the guests to the Gala, Ms. Benzaquen described the work of the Ackerman Institute.

“I’ve seen the work they do at Ackerman,” she commented, “and the results are phenomenal. Ackerman helps give families the strength to communicate with each other in a way where everyone can feel connected… children to parents, sibling to sibling, wife to husband, partner to partner. It’s often hard to talk to the people we’re closest to about the things that trouble us most deeply, but Ackerman therapists have the ability to help people feel safe to open up about things they could never have told their family members before.”

The Tribute this year included a silent and a live auction. In addition, the evening featured a reverse auction, the proceeds of which benefitted the Ackerman Clinic. In his remarks, Mr. Waterston described the work of the Ackerman Institute Clinic.

“Here in New York, the Clinic is open 12 to 13 hours a day during the work week and eight hours on Saturdays, to make services available for families no matter what their schedule. On any given day, therapists may be working with a couple on the verge of divorce, a family torn apart by incest or abuse, a teenager who suffers from depression and suicidal thoughts or a child who is failing in school,” Mr. Waterston said. “The ripple effect is enormous because the repercussions of family problems echo well beyond the family circle. We bring them with us into all our relationships, into the school, the workplace, government, commercial centers, sports… into every aspect of our lives. Strong families mean strong communities… and that’s what Ackerman helps create.”

Lois Braverman, President of the Ackerman Institute, presented several video vignettes that illustrated the work undertaken with families and children at the Clinic and spoke about the value of family therapy.

“We find that when we get all family members involved in the process, whatever the problem, it gets resolved faster and family members feel more connected to one another,” she explained.

“The Ackerman Institute is very privileged to have so many generous and caring friends,” Ms. Braverman, said. “The work we do at Ackerman is vitally important and we absolutely could not do it without the support of our Board and our friends.”

Click here to view photos of the Tribute to Families.