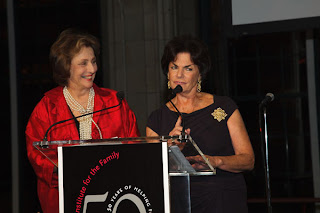 The Ackerman Institute for the Family held its fourth annual Tribute to Families on October 19, 2010, commemorating its 50 years of service. Over 350 people attended the event, co-chaired by Linda Dishy and Judith Stern Peck, and hosted by Actor Sam Waterson. The Gala, held in Gustavino’s near the East River, raised more than $650,000.

In honor of its 50th anniversary, Lois Braverman, President and CEO, paid a leadership tribute to the Ackerman Institute’s board chairs that have carried the Institute through each decade of its work. “Every one of them has brought to their role at Ackerman great depth of knowledge and understanding of our work and our challenges. Without them, we could not have grown and thrived as we have for half a century,” Braverman remarked. The board chairs honored at the event included Gregory Rogers (2008-present), Jane Donaldson (2003-2008), Arthur Maslow (1999-2003), Donna Laikind (1996-1999), Edwina Millington (1987-1996), Carol Maslow (1982-1987), and Mike Gladstein, the first Board Chair of the Ackerman Institute in 1960 through 1964.

The night consisted of silent, reverse, and live auctions, as well as a performance by the Tokens, the music group behind the hit song, The Lion Sleeps Tonight. The Tokens helped mark the significance of the event as they also turned 50 years old this year as well.

Dorie Kempner has been a member of the Ackerman Institute’s Board since 1996. The Kempner Lecture Series was established at the Ackerman Institute in honor of her late husband, Carl, providing funding for an annual lecture on work in the area of family therapy and chronic or life-threatening illness. She accepted the award for Distinguished Service: “I never imagined that standing up here in front of 400 people would feel like a family reunion, but that’s just what it feels like, and, in fact, it’s just what it is… I have been involved with many fine causes, but none has resonated as deeply as Ackerman.”

Current Board Chair, Gregory Rogers, presented the award to Pitcairn, a financial management company that is a pioneer of the multi-family office. Dirk Jungé, Chairman and CEO of Pitcairn, accepted the Corporate Partner Award on the company’s behalf. Rogers spoke about Pitcairn’s commonalities to the Ackerman Institute: “Dirk Jungé has said that wealth management involves more than just numbers. He believes that family dynamics, particularly improving communication between members of all generations to skirt potential conflicts or face and solve existing ones, is the most critical issue facing the health of a family business today.”

The Ackerman Family Partner Award was presented by Gala Co-Chair, Judith Stern Peck, to Jay Hughes, attorney and author of Family Wealth – Keeping It in the Family and his latest Family: The Compact among Generations. Jay Hughes is a well known leader in the wealth management community for his industry-changing ideas. John L. Ward, Clinical Professor of Family Enterprises at the Kellogg School of Management, calls him “the wisest of counselors to successful families” and Judith Stern Peck added that, “he is also the wisest of mentors to me as well as to my professional colleagues.”

Over the past year, the Ackerman Institute has experienced unprecedented demand for clinic services: 5,500 clinic sessions – over 1,500 more than the year before. Most of the families are from economically and socially marginalized communities and face increased stress in this tough economy, but no family is ever refused services because of an inability to pay. The Annual Gala helps support these services.